How to Using FIFA 20 Midfield Runers

The vast majority of FIFA 20 players will look to use 1-2’s with the forward players. If you’re doing this, you may achieve some success, but against the more experienced, better defenders and more tactically aware players, you’ll come unstuck. A great way to make even better use of the 1-2 pass is to play a 1-2 pass with a CM, RM or LM, and it also works very well with CAM’s. Once you’ve played the 1-2 pass into one of the ST’s you then play a regular pass with that player to the other ST. By then, the midfield runner will still be continuing his run so you can then look to pick either him or the ST who played the pass (if they have a high attacking work rate they will be busting a gut to get into the area as well). The timing of the pass is crucial and a game mode this method works very, very well on, is Pro Clubs. Especially if you have a manually controlled front 2 and CAM, using 1-2 passes with these players and making a variety of runs will make you extremely hard to control. 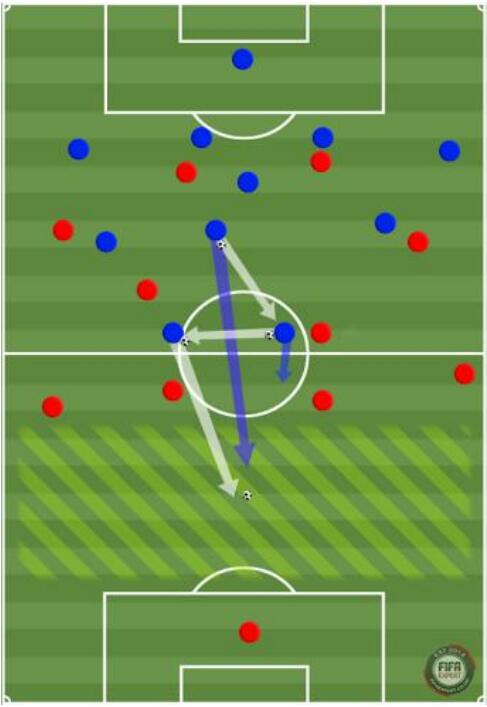 Using the 1-2 also works very well with wide players and FB’s. Even if it is just to be used as a decoy run to create more space in other areas of the pitch, the only downside of this could be thrown up if you become careless in possession, if you wait for runs from deep but get tackled while doing so then you’re going to be outnumbered in an area of the field. See the diagram below for a visual representation of the tips.

TIP – Cancelling a player making a forward run
There is a way to make your player think about stopping a race after you have asked him to follow his pass. There may be a couple of reasons for wanting to do this. Firstly, you might have done it by accident or due to the force of habit. You may also use the 1-2 pass with a CDM who you don’t want to vacate his area of the pitch, or you may want to move the full-back forward by using a 1-2 pass but then realize it will leave a considerable gap and change your mind. You can try to stop the previous player making a run by immediately using a 1-2 pass with the next player who receives and passes the ball. Although this limits movement somewhat, this can easily be altered and tweaked in custom tactics, and by changing the default tactics, you start with (balanced, defensive, attacking, etc.). Be aware that some players with high aggression and high work rates sometimes won’t stop their runs even if you use this tip.

Typically, they may be not worth the problems for reasons that happen to be adequate in the extended run. While they’re useful for players who may possibly know nothing about FIFA 20. For essentially the most component, they are finding out tools for newbies to ease them into FIFA 20. For much more FIFA 20 guides, it is possible to go to U4GM.com. Just a reminder: you can get 5% off to Obtain FIFA 20 Coins from this article.