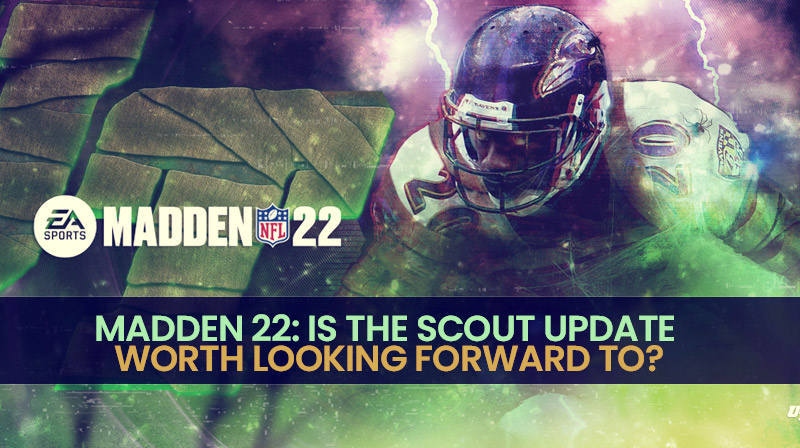 Madden 22: Is the scout update worth looking forward to?

The franchise mode in Madden 22 is one of the game modes that players love very much, and the highly anticipated Madden 22 scout update is an update that fans and players look forward to. And this new scouting function is also an important feature that players have placed many expectations on to get a franchise mode experience. It’s not just about the player’s latest adventure in the game, the way to get Madden 22 MUT Coins, the factors that win the game, etc. In the latest update, it is announced that the franchise mode scout is added. Is it worth the players’ attention?
Are you looking forward to it? Let’s take a look!

The problem with announcing the franchise model in sports video games and then making fan players wait for it is that it often leads to excessive and unreasonable expectations. In other words, the importance of this patch to players is very high. Therefore, instead of being eager to make judgments based on my initial impact, I want to spend a few more days seeing how it works in different scenarios in multiple seasons. My hope for this patch is that it can add layers to the Madden franchise model and give me and many others a reason to continue playing season after season. So let’s see if it does it in this Madden 22 scout update review.

From the beginning, the scout update will remind you of the schedule you will follow and follow as a coach. As the season progresses, you will notice that there are different requirements and options available to you in any given week. An example of this is multiple mock drafts, which are dynamic because the team’s record fluctuates as the season progresses.

As the season continues, you can also direct your scouts in different directions, and you will begin to have the option to redirect the focus of scouts to the national and regional levels. You will also hone specific players and positions to help meet the particular needs of your current team.

As the head coach/general manager, the new scout addition also enables you to hire fire scouts based on your needs and experience. Although I like the idea behind this option, it feels a bit old-fashioned. Developers could have adopted this idea and implemented the risk and reward type system in other sports series.

For now, the ability to hire or release a scout is based only on experience and expertise in a specific field. When deciding who to hire or keep, no money is involved at all. In addition, there is almost no information to help me understand which scout is best for my needs now and in the future.

The new scout options are what I like, and I think they are an essential foundation for the future. However, they are not as vibrant or deep as I hoped this time.

As I mentioned before, one of the new reconnaissance functions is conducting surveillance at the national and regional levels.

However, the fact that I did find interesting and valuable is that I can allow sure scouts to focus on specific areas where most players are more suitable for my team’s needs. This will enable me to fill in the gaps in the short term and helps change the future philosophical direction of my team.

Similarly, area survey has been implemented wisely, and this feature can be enriched to help users try to focus on the team’s specific needs. Although what we have does help in this regard, it may go deeper in the future and become a more significant asset in finding talent that may not be on the front page of a giant board.

When it comes to sports events and transactions, I will always accept the idea of ​​”this is an educated guess.” Even the best bosses, general managers, and coaches will miss out, and some of the best people may miss out badly in any given deal. Some coaches and general managers are known for their outstanding performances in the rear wheel, while others often struggle under the pressure of the top five in the first round. These scenarios are nothing new to the NFL and should have been implemented in the Madden franchise long ago.

Even if the mid-season deal is not successful, or the free-agent signing in the offseason fails, or the draft picks are shattered, the position of power still relies heavily on scout reports, movies, interviews, and group discussions to make these preliminary decisions. In short, this is difficult to replicate in video games. Although the reconnaissance system in Madden 22 did not reach the level of realism I had hoped, it touched on this realism and added chaos and mystery elements, which are good cornerstones for the future.

In addition, the information to be consumed is less than what we have previously available. In a way, I kind of like that. There is some important information on the table to dig out. Still, in the end, the reconnaissance information feels incomplete, putting us in a position of being more dependent on others.

When you replace a system that many people are accustomed to and has become obsolete over the years, it is best to ensure that the components you are returning are deeper and more realistic. Without a doubt, I like the new system, but they need to keep adding content and provide users with greater control through more input.

Based on this, no matter what you think about the new scouting system and process, the truth is that there is less to do. As I mentioned above, I always like the idea of ​​applying the “unknown” element to sports names, in a sense, we have. Sadly, it now has an obvious shortcoming.

In the future, I think developers can realize the “fog of war” scenario while still making reconnaissance a deep and immersive aspect of the Madden franchise model. I have always liked the “points distribution” system. You can distribute the points to the most needed and most exciting areas.

The current system feels more like the slogan of the famous salesman Ron Popeil and his “set it all” marketing brand. The reality is that once you choose your scouts, assign them to their areas and notify them where their focus should be. The new reconnaissance system will become very non-intrusive and very disconnected for users.

In other words, the less invasive approach may even be positive, but you have to give me more opinions on how to help shape the results.

Let me allocate scout points from the pool and tell each scout in detail what is most important to me. Let me look at the strengths of the scouts, or give me a reason to show them the door and find their replacement.

The biggest problem I have is that the scouts in place are just names with numbers and focus. Give me detailed information and let me choose the type of scout I want and need.

Even if I hire a new scout to replace the former, I have to replace that scout with a similar scout. In other words, the only advantage of replacement is the focus of the new player. This is indeed where the lack of monetary investment in specific scouts shows an apparent weakness.

The new scouting system also includes NFL comprehensive reports, career day results, and the option of holding private training. Although there is a lot of information here, I feel that they missed the opportunity for users to control and use perspective rookies in personal training.

The practice range is already in the game, so let me control the talents and run them in different scenarios. Let me see where they are naturally talented and where they may have problems.

Once again, many things can be added to provide a truly in-depth experience, but it feels more like a foundation is being created. In other words, the foundation will only work when the architect continues to build and deliver meaningful work.

Conclusion
Finally, is it worth the wait for those who have postponed the start of online franchising and leagues until now? The answer to this is always subjective, but in my opinion, the answer is probably not. When balancing with all the games (even seasons) that some of us can play now, the new scouting experience does not provide enough depth and realism at this point.

If they keep the foundation and continue developing on this basis and add scenarios that include variables and risk and reward opportunities, we can make a difference here. Continue to create the necessity for scouts, but let me (as a GM) participate in this process so that the final product on the court is either a success or a failure based on the collective as a whole.